This significantly reduces the risk of fire due to faulty conductors and connections. The protective function of the AFDD has already proven its worth internationally, and has been used in Germany since February 2016.

The 18th edition of BS 7671, when published in July, recommends the use of these to provide additional protection against fire.

An AFDD is activated by both series and parallel arc faults. Unlike circuit breakers or RCDs, an AFDD does not have an electromechanical trigger, but utilises electronic technology to analyse the signature (waveform) of an arc. It reliably differentiates between an arc fault and the signature (waveform) in normal switching and control events, preventing false tripping.

Arc faults can be caused by all types of line faults and worn contacts;

An AFDD will trip the circuit when a potentially hazardous arc occurs, eliminating the resulting fire hazard.

Contrary to common belief, AFDD’s do offer protection against arc faults in ring final circuits and to the equipment being fed from this circuit. A series arc fault in one leg however, is unlikely to be at a dangerous level so will not be detected. This is due to current in this instance flowing around the other leg of the ring. A series arc fault will be detected in equipment and in flexible cables connected to the ring final circuit. Parallel arc faults are detected and disconnected in all parts of the ring circuit and on all connected equipment.

Effective Areas Of Protective Devices Depending On Fault Position & Type

The Hager technical team contribute to a number of key industry publications, for AFDD we have been involved in the preparation of the BEAMA Guide to Arc Fault Detection Devices (AFDDs)

Download our documentations below, containing everything you need to know about Arc Fault Detection and the 18th Edition

More from the 18th Edition

A transient overvoltage or surge is a short duration increase in voltage measured between two or more conductors. In short this means anything from microseconds (millionths of a second) to a few milliseconds (thousandths of a second) in duration.

RCD's exist in various different forms and react differently depending on the presence of DC components or different frequencies.

Devices such as switches, RCCBs etc. in distribution boards and consumer units may have historically had their rated current determined after having taken diversity into account but without having considered overload protection of the devices.

A collection of the latest guides relating to 18th Edition, Hager is proud to be a technical contributor to these guides which provide technical advice on a range of 18th Edition related topics.

Check out our product solutions for Arc Fault Detection below

Our Range of Arc Fault Detection Devices can be found here. 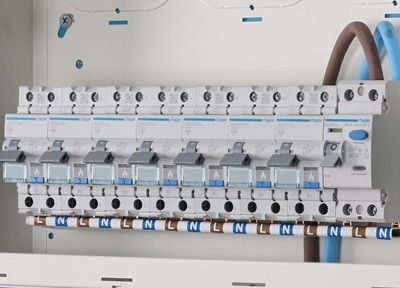 We have a range of Dual Row Consumer Units ready for the incorporation of Arc Fault Detection Devices thanks to their 2 Pole Busbar.